CHOOSE A DATE FOR THE INSTALLATION

Burglar's code: symbols and markings used by thieves and their meaning

Small conspicuous symbols, signs and markings on the facade, front door, letterbox, intercom or garden fence. Have you ever seen these symbols in your house, your shop, your neighbourhood or your city? Then you should be careful, because these little secret codes can serve as an information system for organised gangs of burglars. They indicate, for example, when the property is empty, whether there is anything interesting to steal in the house or on the premises, and how to get into the building.

Burglars are always active, everywhere and at any time of the day or night, and what is even more striking, they are becoming "more and more professional". In recent years, private security companies and law enforcement agencies have noticed that with the increase in crimes, there is also a worrying professionalisation of the perpetrators, and the use of a secret code is one of the indicators of this.

Here you will find more details on this topic and advice on what to do if you find yourself in this situation.

What are the markings and symbols used by burglars?

In recent months, there have been frequent reports in the media about the secret code of thieves. These secret symbols, which have always been used by criminals, thieves and burglars, have recently gained renewed attention.

"Thieves study a property carefully before breaking in"

Although it is not possible to determine how often and how these symbols are actually used, nor whether their meaning is universal, the police have been able to establish a pattern of action by burglars.

The "professionalisation" of the burglars has led to a division of labour in which patrols have been formed to watch residential and commercial buildings and locate worthwhile burglary targets, which are sometimes marked by means of symbols. A second group of the same gang of thieves is usually responsible for the actual execution of the crime, i.e. burglaries of flats, houses, offices or other commercial properties.

What do the burglar's markings look like and where are they placed?

What is the meaning of the burglar's code? 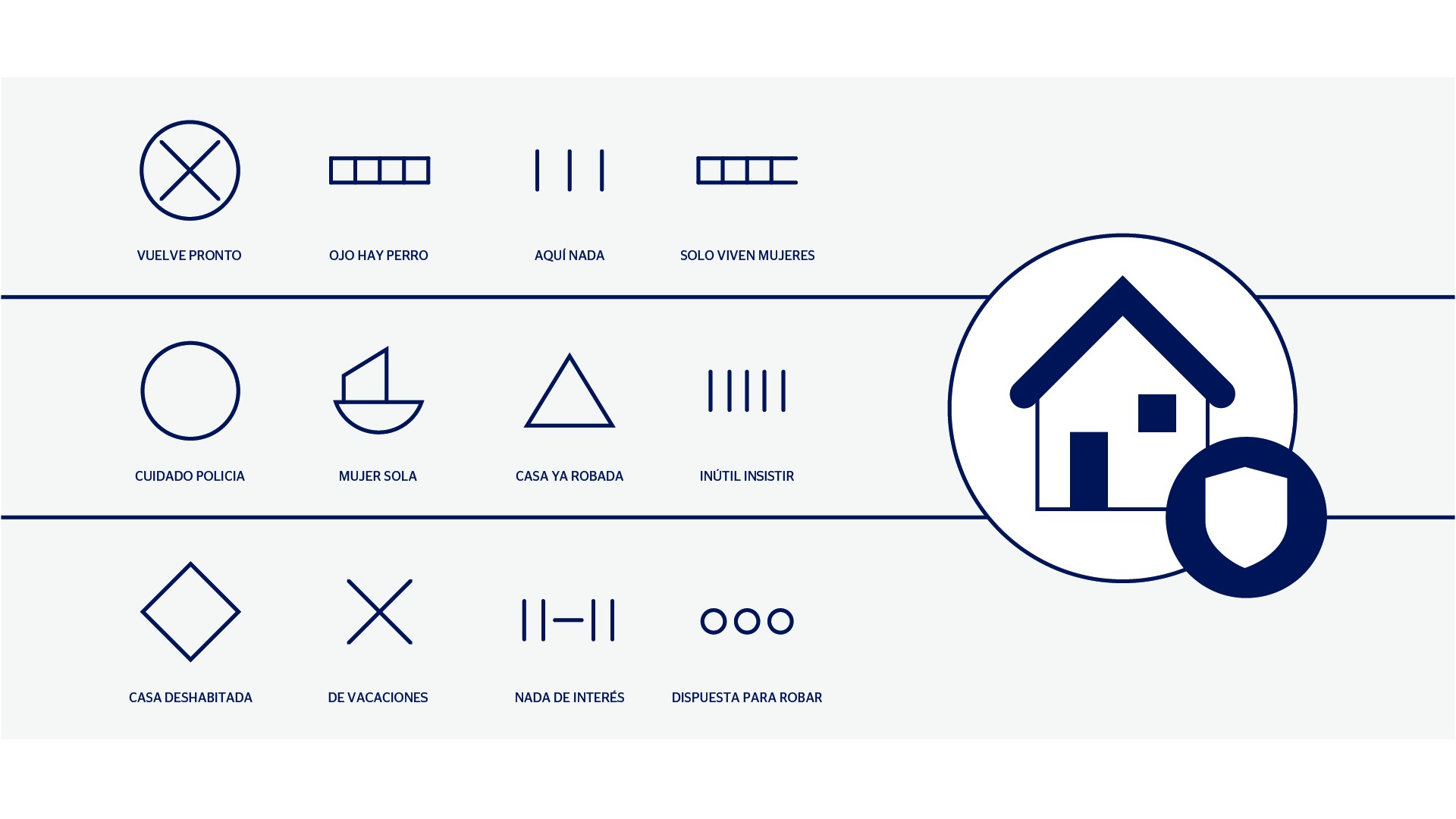 Although there are plenty of pages on the internet with the meanings of these symbols, it is not possible to conclusively judge the truth of the interpretations and information. It is even possible that there is no uniform system among thieves, but that each gang has its own symbols with their own meanings, so that other groups of criminals do not benefit from the groundwork in their robberies.

The symbols are usually letters, numbers, geometric figures and other drawings, either individually or in combination.

Typical meanings attributed to these symbols include:

How widespread is the use of thieve's symbols?

As for the data on their use, the figures may also be unreliable, as the actual symbols may have been ignored in the past because they were assumed to have been painted by children or pranksters. Sometimes they may also have been overlooked after being theft. It is advisable to take the interpretation of these symbols with a caution, but still be vigilant and pay attention when these signs appear in your own home or business.

What to do if you discover burglar's markings in your home or business?

Other methods used by burglars to obtain information

Besides pure observation, burglar gangs also use other methods to obtain valuable information about the house or business and the habits of the tenants or employees.

All these methods, which are inconspicuous and do not arouse suspicion among the neighbours, are used to find out if the property is empty.

Other situations to watch out for

How to deter burglars from breaking into your home

The most effective deterrent for burglars is an alarm system.